The Aurora and Wisconson shootings are just the beginning of the process that is occuring in this country.  The closer the election gets, the more frequent these false flag attacks will become until there is an outcry for gun control or total disarmament of US citizens.  This is a dangerous way of thinking.
Think about it:

To those born-again believers in Christ who are reading this, you understand why this is happening.  To those who are not born-again, this is only the beginning of the end of this nation.  There are groups of powerful people in this world who have been planning a one world government for the past few hundred years.  They have been very patient and it seems as if the time has come to make their final few moves.
I want to caution you; there will be more government sponsored shootings as the election gets closer.  What does the election have to do with this?  If the president calls for marshal law, the Constitution is automatically suspended and you can expect the election to be postponed indefinately.  Why would the president call for marshal law?  Well, because he’s not going to give up the presidency.  If he thinks he’s going to lose, he’ll create a false flag attack so serious (assassination attempt?) that he will call for marshal law and probably call for a total weapons ban.  The election will only take place if he thinks he can win.  If not, expect a false flag attack and marshal law before Nov 6th.  If he DOES win the election, then he doesn’t have to worry about running for the presidency again and he will lay the hammer down on this nation through the signing of a number of executive orders; Total gun ban.  National banking system.  Pulling back missile defences in Europe.  Putting the US forces under the authority of the UN.  Etc…  It’s going to be a mess.
One way or the other, there will be a one world government and the US is going to be a part of that.  Think it can’t happen here?  Look at the great empires that ever existed.  What happened to them?  Why should we be any different?  Capitalism will fall when the dollar crashes and we spiral into an economic disaster.  When that happens: How will people eat?  Keep their utilities on?  Get their medications?  Travel?  Dispose of their waste?  Protect themselves from rioters and looters?
The government will come in riding on a white horse as the country’s “savior” to bring order to the country and provide it’s citizens with their basic needs.  In effect, the state will become god.
The United States isn’t mentioned in the bible for a reason.  Our troops aren’t going to be under US control during the end times.  Our country will fall and be ruled by a dictator who will eventually be under the control of the Antichrist.
God has told us that this was going to happen; that the world was going to be ruled by the Antichrist, who will institute a one world government, a new economic system and a one world religion.
Call me crazy or a conspiracy theorist, I don’t care.  I’m awake.  I see what’s going on.  Are you awake or are you busy watching American Idol or Dancing with the Stars while all this is going on right under your nose? 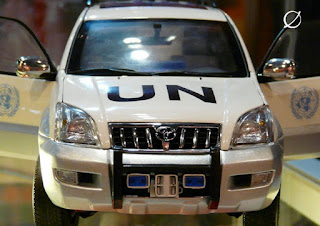 COMING TO A CITY NEAR YOU

Repent and be forgiven! Believe and be saved!
TribulationHarvest.net
Posted by Ken Souza at 3:39 AM No comments:

The Story Behind the Obelisk in St. Peter's Square in Vatican City 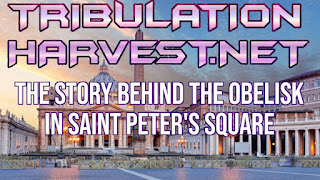 The three-hundred-thirty ton Obelisk in St. Peter's Square in the Vatican City is not just any Obelisk. It was cut from a single block of red granite during the Fifth dynasty of Egypt to stand as Osiris' erect phallus at the Temple of the Sun in ancient Heliopolis, the city of “On” in the Bible, dedicated to Ra, Osiris and Isis. The Obelisk was moved from Heliopolis to the Julian Forum of Alexandria by Emperor Augustus and later from thence (approximately 37 AD) by Caligula to Rome to stand at the spine of the Circus. There, under Nero, it's excited presence maintained a counter-vigil over countless brutal Christian executions. Over fifteen hundred years following that, Pope Sixtus V ordered hundreds of workmen under celebrated engineer-architects Giovanni and Domenico Fontana to move the phallic pillar to the center of St. Peter's Square in Rome. Though worshiped at it's present location ever since by countless admirers, the proximity of the Obelisk to the old Basilica was formerly “resented as something of a provocation, almost as a slight to the Christian religion. It stood there like a false idol, as it were vaingloriously, on what was believed to be the center of the accursed circus where the early Christians had been put to death. Its sides, then as now, were graven with dedications to (the worst of ruthless pagans) Augustus and Tiberius.”

The fact that many traditional Catholics as well as Protestants perceived such idols of stone to be not only objects of heathen adoration but the worship of demons makes what motivated Pope Sixtus V to erect the phallus of Osiris in the heart of St. Peter's Square, located in Vatican City and bordering St. Peter's Basilica, very curious. To ancient Christians, the image of a cross and symbol of Jesus sitting atop (or emitting from) the head of a demonic god's erect manhood would have been at minimum a very serious blasphemy. Yet Pope Sixtus V was not content with simply restoring and using such ancient pagan relics (which were believed in those days to actually house the pagan spirit they represented) but even destroyed Christian artifacts in the process. The bronze for the statues of Peter and Paul came from the medieval doors of S. Agnese, from the Scala Santa at the Lateran, and from a ciborium at St. Peter's.

At the time Sixtus was busy reintroducing to the Roman public square restored images and statues on columns, the belief remained strong that these idols housed their patron deity, and further that, if these were not treated properly and even placed into service during proper constellations related to their myth, it could beckon evil omens. Leonardo da Vinci had even written in his Codex Urbinas how those who would adore and pray to the image were likely to believe the god represented by it was alive in the stone and watching their behavior. There is strong indication that Sixtus believed this too, and that he “worried about the powers that might inhabit his new urban markers.” This was clearly evident when the cross was placed on top of the Obelisk in the midst of St. Peter's Square and the pope marked the occasion by conducting the ancient rite of exorcism against the phallic symbol. On that morning, a pontifical High Mass was held just before the cross was raised from a portable alter to the apex of Baal's Shaft (as such phallic towers were also known). While clergy prayed and a choir sang Psalms, Pope Sixtus stood facing the Obelisk and, extending his hand toward it, announced “Exorcizote, creatura lipidis, in nomine Dei” (“I exorcise you, creature of stone, in the name of God”). Sixtus then cast sanctified water upon the pillar's middle, then it's right side, the left, then above and finally below to form a cross, followed by, “In nomine Patris, et Filij, et Spiritus sancti. Amen” (“In the Name of the Father and of the Son and of the Holy Ghost. Amen”). He then crossed himself three times and watched as the symbol of Christ was placed atop Osiris' erect phallus.

Repent and be forgiven! Believe and be saved!
TribulationHarvest.net
Posted by Ken Souza at 4:35 AM No comments: