Repent and be forgiven! Believe and be saved!
TribulationHarvest.net
Posted by souzak99 at 2:15 AM No comments:

And God Will Send Them A Strong Delusion

READ THE BLOG OR WATCH THE VIDEO!!!
VIDEO: AND GOD WILL SEND THEM A STRONG DELUSION 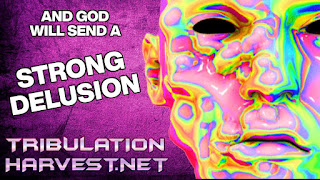 As the millennial reign of Christ approaches, so do the ominous hoof beats of the coming Tribulation. Biblical prophecy makes it clear that God's going to send a powerful delusion upon an unrepentant population. (2 Thess. 2:8-12)

Ever since sin entered the garden, mankind has chosen self over God. It's the result of our fallen nature. The desire to live our own lives apart from God is just as strong today as it was in the beginning, the evidence of which we can find in the myriad of false religions and belief systems in the world. We have Wicca, Scientology, Humanism, Buddhism, Shintoism, Universalism, Rastafarianism, Agnosticism, Atheism, Islam, etc... Mankind's attempt to bring meaning to their lives apart from the One True God continues to occupy the minds of the majority of the population as they spend their time fulfilling their own desires and seeking their own "truth"... a truth that fits their own individual moral code. Christians know there is only one "truth," and that is Jesus.

What happens when an individual, group, city, nation or worldwide population becomes stiff necked, hard-hearted, and turn their backs on God, choosing instead to satisfy their own fleshly desires and worship their own false gods? The bible is full of examples of the consequences of these actions. Here are just a few you may be familiar with:

- The fall of mankind in the Garden of Eden. (Genesis 3)
- The great worldwide flood. (Genesis 6-7)
- The destruction of Sodom and Gomorrah and their inhabitants. (Genesis 19:1-25)
- The fall of Nineveh (Nahum 1-3)
- 40 Years of God's people wandering in the desert, denying an entire generation entrance into the promised land. (Numbers 14)
... and numerous incidences of God's chosen being taken into captivity.

After these judgments, mankind, as a whole, has still refused to repent. Lessons learned are soon forgotten as time passes and memories fade, taking what was once a mighty work of God and diminishing it to the point where it's seen as just an old fable. So here we are today, in what people would like to believe is a more enlightened age. As mankind continues to push God away, they are unwittingly setting themselves up for the consequences to follow, just as those who have lived before us have done. This time, the consequences will involve falling under a strong delusion that God's going to send during the Tribulation.

What exactly is the definition of a delusion?

Oxford Dictionary: "an idiosyncratic belief or impression that is firmly maintained despite being contradicted by what is generally accepted as reality or rational argument..."

Cambridge Dictionary: "something a person believes and wants to be true, when it is actually not true"

Mirriam Webster: "something that is falsely or delusively believed or propagated"

Some of the consequences of this "delusion" will be:

- Being ensnared by a one world religion and one world government/economic system
- Receiving the mark of the Beast, which will mean declaring themselves an enemy of God, suffering God's wrath during the Tribulation, and sealing their ultimate fate.
- Being deceived into believing that Christians are the enemy and participating in the worldwide persecution and execution of born-again believers.

So, who exactly are these people who will fall under this strong deceptive influence? Read Romans 1:18-32, John 8:42-47, and 2 Thess. 2:8-12. As you can see, mankind hasn't changed throughout the course of human history. Mankind's increase in knowledge has allowed us to invent new and convenient ways to sin, but our sin nature has not changed. Sin also challenges born-again believers, who continue to live in these fleshly tents and experience daily battles.

Man's heart is wicked, God's word tells us so (Jeremiah 17:9, Matthew 15:19). Being under the influence of this strong delusion will cause reason and sound logic to fly out the window. As a result, most, if not all, will never experience a repentant heart as they endure the judgments of God during the Tribulation. No. Instead of coming to God on their knees, they will do just the opposite. They will shake their fists at God, curse Him, and reject Him. (Rev. 16:8-11)

God will be sending this strong delusion at a time when born-again believers have already been raptured, rescued in the blink of an eye from the 7-year Tribulation to come. Those remaining on the earth will be in one of two groups:

- Those who repent and believe (yes, it is still possible to become a born-again believer during the Tribulation).
- Those who will continue to reject God.

Unfortunately, with the Holy Spirit no longer holding back the full force of evil in the world after the rapture, Christians during this time will suffer worldwide persecution. That would include the United States as well. Even now, Christians are being persecuted all over the world. Even in the United States, bible believing Christians are being classified as radicals and possible terrorists. We are in the first stages of worsening persecution.

During the Tribulation, those living under this strong delusion will honestly believe that they are performing a beneficial act for the good of mankind and world peace by persecuting, incarcerating, torturing and killing those that they deem "intolerant," "racist," "judgmental," "divisive," "dangerous," "phobic," and, believe it or not, "delusional." But that's not all. Sin's ferocity, no longer restrained, will be multiplied many times over. If the unsaved are willing to try and beat down the doors of the Supreme Court, as we witnessed in recent history, if they snap at a moment's notice and verbally and/or physically attack someone who doesn't support their cause to murder babies in the wombs of their mothers, if they are willing to flaunt their hatred by holding up and effigy of a president's bloody, severed head, if they can go on television or stand on their soap box in public to incite groups of other individuals to harass law abiding citizens, if they can call for the death of those who don't agree with their sinful beliefs, if they can do all this and more in the name of what they deem is "right" in their eyes at this moment in history, then when the full force of sin is released, the harassing, beating, torturing and killing of Christians will become their fantasy come to life.

This strong delusion will help the Antichrist affirm his position as the head of the New World Order, a one world government. Those unsaved individuals who are under this strong delusion will see him as mankind's savior during a time of economic and social upheaval and when he is killed and then "resurrected" a few days later during the middle of the Tribulation and at the start of the Great Tribulation, he will secure his place as their temporary "god."

- Biblical prophecy reveals that God is going to send a strong worldwide delusion during the Tribulation.
- This delusion will affect everyone who is not a true born-again believer.
- Those under this delusion will eagerly and willingly take the mark of the Beast and even worship him and his image.
- Christians will be persecuted and martyred by those who believe they are actually doing what is right in their eyes.
- Biblical history reveals a multitude of examples of God's righteous judgments against a wicked, rebellious and unrepentant individual, group, city, nation and world population.
- This delusion will help cement the position of the Antichrist as the head of the one world government and as mankind's "savior."
- This is just the precursor to their eventual defeat and eternal punishment.

Don't leave yourself open to this delusion. Repent and be forgiven! Believe and be saved!

All scripture, unless otherwise noted, is quoted from the New American Standard Bible


Repent and be forgiven! Believe and be saved!
TribulationHarvest.net
Posted by souzak99 at 10:58 PM No comments:

souzak99
Massachusetts, United States
Just a guy on the bottom rung of the ladder hoping to live a life of obedience to the Lord and to offer up myself as a vessel through which He can touch the lives of others.