Is The Word "Rapture" In The Bible? 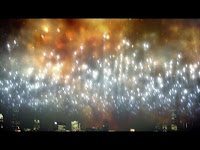 Can the word "rapture" be found in the bible? Here is my answer short and sweet. "Honestly, it all depends on what language the English translation came from."

Let's look at the verse we're discussing: "Then we which are alive and remain shall be caught up together with them in the clouds, to meet the Lord in the air: and so shall we ever be with the Lord." (1Thessalonians 4:17 KJV)

From Greek to English

Let's take a look at the Greek word that's at the root of this discussion.

Harpazo (har-pad'-zo) 1) to seize, carry off by force 2) to seize upon, claim for one's self eagerly 3) to snatch out or away

Why do we use the word "rapture?"
The word "rapture" is used as verbal shorthand describing "the act of being caught up, snatched, taken suddenly by force." I mean, if we had to describe it that way every time we mentioned the event, our conversations could get pretty long-winded. After all, there are other examples of verbal shorthand that we use to describe things in the bible. One example is the word "Trinity." Do a word search and you won't find it anywhere in scripture. It's verbal shorthand. When we use that word, it's clear that we're referring to the Father, Son and Holy Spirit.

Repent and be forgiven! Believe and be saved!
TribulationHarvest.net
Posted by Ken Souza at 11:50 PM No comments:

The World Won't Ever Be Void Of God's Chosen

Since the creation of mankind, there has always been someone on earth who has had a close relationship with God, even if that individual stood alone or acted without regard to their own personal safety. Adam, Noah, Abraham, Jacob, Issac, Moses, David, Esther, Elijah, Daniel, Jeremiah, Shadrach, Meshach, Abednego, etc... No matter what Satan did to try and wipe God from the minds of mankind or to destroy God's people, he just couldn't accomplish that task.

Then a marvelous thing happened. Jesus came into the world! Through His birth, sinless life, crucifixion, death and resurrection, He provided us access, in His name, to our Father in heaven. Although all believers rejoice in that knowledge, the unsaved, and their slave master Satan, wish that it was otherwise.

There never has been a time when God was not praised and worshiped on the earth, and there will never be a time when unbelievers will ever experience a world where God is not Lord of all.

Many unbelievers half-heartedly hope that the Rapture is a real event so that they can finally be rid of all those "intolerant," "hateful," and "judgmental" people who call themselves Christians. What they don't realize is that once Jesus returns for His bride and quickly whisks her away, there will be a whole host of born again believers to take their place.

That's right, there will be millions of men and women who will repent and believe and take up where the raptured saints left off. Who will they be?
The first two groups will have a working knowledge of who Jesus is and what true Christianity is all about. They will most likely be the ones to teach and lead those who make up the last two groups.

What the world doesn't foresee is the chaos that is going to arise immediately following this worldwide event. The joyous hope of ridding themselves of every true born again believer will leave them desperate, petrified, horrified, and regretful. The world that remains after the Rapture won't be the world they envisioned. They believe they'll finally make the world a utopia, but it becomes just the opposite. 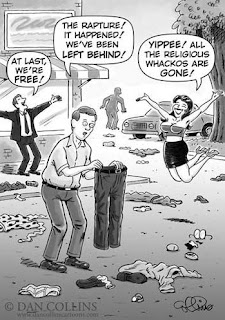 Many will develop a hate for God to the point of where it will consume them. They will shake their fists at Him in defiance and help to track down born again believers in order to hand them over to the authorities for re-education, and eventually, execution.

No, the unbeliever will never be rid of true men and women of God no matter how hard they try. From Adam's time on this earth to the moment Jesus returns as King of kings and Lord of lords at the battle of Har-mageddon, God will always have His chosen people here to spread His word and keep the faith alive in the midst of those who have not yet repented and believed. God has gone, and will go, to great lengths to make sure that mankind has every opportunity to hear the truth, repent, and believe.

To God be all the glory and honor forever and ever! Amen!

Repent and be forgiven! Believe and be saved!
TribulationHarvest.net
Posted by Ken Souza at 10:57 PM No comments: