Is The World Ready For A False Messiah? 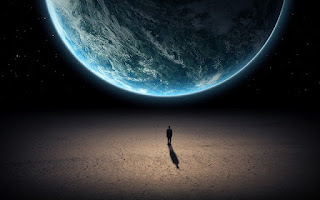 It appears the world today is more than ready to welcome in a messiah-like individual who will appear to be able to bring peace and prosperity to the world.  Have we reached that point in human history where the spiritually blind as a whole are ready to welcome such an individual?  I'd like to share with you a few quotes that I think you'll find quite revealing, after which, I would like to share an excerpt from the book, Petrus Romanus.  I must apologize from the outset for the length of this article.  I usually try to keep these articles as brief as possible, but this one will be the exception to the rule. I've included as many links as I could find for the actual quotes listed in this article.

"Barrack's appeal is actually messianic... he... communicates God-like energy. What if God decided to incarnate as men preaching hope and change? And what if we... let them slip away, not availing ourselves... to be led by God!" Steve Davis, Journal Gazette

"He won't just heal our city-states and souls. He won't just bring the Heavenly Kingdom - dreamt of in both Platonism and Christianity - to earth. He will heal the earth itself."  Micah Tillman, The Free Liberal

"Does it not feel as if some special hand is guiding Obama on his journey, I mean, as he has said, the utter improbability of it all?" Daily Kos

"We have an amazing story to tell… "This president has brought us out of the dark and into the light." Michelle Obama

"No one saw him coming, and Christians believe God comes at us from strange angles and places we don't expect, like Jesus being born in a manger."  Lawrence Carter

"We just like to say his name. We are considering taking it as a mantra."  National Review Online

"Many spiritually advanced people I know (not coweringly religious, mind you, but deeply spiritual) identify Obama as a Lightworker, that rare kind of attuned being who has the ability to lead us not merely to new foreign policies or health care plans or whatnot, but who can actually help usher in a new way of being on the planet, of relating and connecting and engaging with this bizarre earthly experiment. These kinds of people actually help us evolve. They are philosophers and peacemakers of a very high order, and they speak not just to reason or emotion, but to the soul." Mark Morford, SF Gate

"I'll do whatever he says to do. I'll collect paper cups off the ground to make his pathway clear." Halle Berry

"He walks into a room and you want to follow him somewhere, anywhere." George Clooney

"Obama's finest speeches do not excite. They do not inform. They don't even really inspire. They elevate. . . . He is not the Word made flesh, but the triumph of word over flesh . . . Obama is, at his best, able to call us back to our highest selves."  Ezra Klein

"Barack Obama is our collective representation of our purest hopes, our highest visions and our deepest knowings . . . He's our product out of the all-knowing quantum field of intelligence." Eve Konstantine

"The event itself is so extraordinary that another chapter could be added to the Bible to chronicle its significance." Rep. Jesse Jackson Jr., Politico

We can see, just by these few quotes alone, how the world seems desperate for someone to follow. Someone to "enlighten" them and "elevate" them; someone to "usher in a new way of being on the planet;" someone who seems to them to have god-like energy."

There are so many people who consider themselves "spiritual" and "religious" but who do not have that personal relationship with the Creator of the universe. They don't have that one-on-One relationship with their Father, with their Savior, with the Holy Spirit. There are also those who are not looking for a spiritual experience, but instead are looking for a inspirational figure they can put their trust in.

If individuals reject God as He is revealed in the bible, then they must come up with another "god" to worship and follow. By their words and actions, they show that they are eager to follow any light they see (other than the true Light). What they don't realize is that the light they choose to follow is the false light of a corrupt messiah... an anti-Christ.

Take a look at this brief video.

The president uses the word "epiphany" in this video.  The word actually means, "the sudden realization or comprehension of an appearance of deity to man."  This video reveals to me the disturbing and misguided desires that people have in searching for "the one" who promises to bring them physical salvation instead of the One who can truly give them eternal salvation.

Surely those who profess to be Christians will not be blinded by this false light, right?  Here is an excerpt from the book, Petrus Romanus:

"Though at this time... it appears likely Obama will only assist in the rise of the superhuman superstar the world has been hoping for, if symbolic gestures are any indication, there certainly were plenty of religious folks during his march into the White House that were ready to accept him as 'The One.' Dozens of churches and faith groups, including mainline Protestants, organized activities to mark Obama's inauguration as a 'spiritual' event. Randall Balmer, professor of religion in American history at Columbia University, admitted he had never seen anything like it before. CNN went so far as to compare Obama's inauguration to the Hajj - the journey by Muslims to the holy city of Mecca, an obligatory pilgrimage that demonstrates their dedication to Allah.

In Des Moines, Iowa, an inaugural parade for Obama included a simulation of the triumphant entry of Christ in which a facsimile of Obama rode upon a donkey. As the reproduction made its way down the streets, palm branches were handed out to onlookers so that they could wave them like Christ's adorers did in the twenty-first chapter of Matthew. Several ministries, including the Christian Defense Coalition and Faith and Action, came together to perform what was heralded as the first for US presidential inaugurations - applying anointing oil to the door posts of the arched doorway that Obama passed through as he moved to the platform on the West Front of the Capital to be sworn in. Congressman Paul Broun (Georgia) was part of the ritual, joining Rev. Bob Schneck, who said, 'Anointing with oil is a rich tradition in the Bible and... symbolizes consecration, to setting something apart for God's use.' Even the conventional prayers, which have been historically offered during US presidential installation ceremonies, carried an unparalleled New Age flavor this time around. Rick Warren, considered America's Christian pastor, rendered a blessing in the name of the Muslim version of Jesus (Isa), while the bishop of New Hampshire, Gene Robinson, invoked the 'God of our many understandings.'

Not only did the country elect Obama in 2008, they also elected him again in 2012! This reminds me of a particular portion of scripture: "For they exchanged the truth of God for a lie, and worshiped and served the creature rather than the Creator, who is blessed forever, Amen." Romans 1:25 (NASB)

So, is the world ready for a false messiah? From the quotes I've read, from listening to Obama's own words and seeing the reaction of the crowds, from the attack on Christians around the world, including increased verbal and legal attacks on Christianity in the US, I can only believe that the time is near. We must be patient and we must not fear. God is our strength and our refuge and His timing is perfect.


Repent and be forgiven! Believe and be saved!
TribulationHarvest.net
Posted by Ken Souza at 6:29 PM No comments:

Did Constantine really convert to Christianity?

Constantine's conversion is a little sketchy to say the least.  There are two versions of his conversion.  Which one could be considered true is the question.  If you remember, Constantine supposedly had a dream where Jesus appeared to him and instructed him to use the sign of the cross to safeguard his troops in the confrontations he would have with his enemies.  In both versions of this story, there is not one mention of Did Constantine really convert to Christianity.

His conversion is a little sketchy to say the least.  There are two versions of his conversion.  Which one could be considered true is the question.  If you remember, Constantine supposedly had a dream where Jesus appeared to him and instructed him to use the sign of the cross to safeguard his troops in the confrontations he would have with his enemies.  In both versions of this story, there is not one mention of Constantine’s need for repentance.  Remember, Constantine worshiped pagan gods.

When he “converted” to Christianity, he retained the title of Pontifex Maximus (a title Roman emperors bore as head priests of the pagan priesthood) until his death.  His religious beliefs seemed to be a mixture of many different religions, including Christianity.  Here are some examples of Constantine’s actions after his supposed “conversion.” 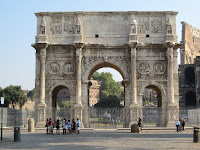 Could Constantine's experience with a godlike being really have been a manifestation of the “prince of the power of the air?”  Although there are some positive things that Constantine did, could his initial “spiritual” experience have been the enemy’s successful attempt to infiltrate the church?  Whether it was a divine experience or a demonic experience, the result was that pagan rituals and idolatry survived under Constantine’s reign, some of which still survive in Roman Catholicism.

Note: It has been shown that the “Donation of Constantine."  is a counterfeit document, so this cannot be used as evidence of Constantine’s conversion.  It’s believed to have been forged near the middle of the 8th century. Remember, Constantine worshiped pagan gods.


Repent and be forgiven! Believe and be saved!
TribulationHarvest.net
Posted by Ken Souza at 4:58 PM No comments: