In chapter 4 of Revelation, John is taken in spirit to heaven where, among other things, he sees 24 thrones circling the throne of God. On these thrones sit 24 elders. They are each in white robes and have crowns upon their heads.

Let's quickly refresh our memory by reading this short portion of scripture:

1After these things I looked, and behold, a door standing open in heaven, and the first voice which I had heard, like the sound of a trumpet speaking with me, said, "Come up here, and I will show you what must take place after these things." 2Immediately I was in the Spirit; and behold, a throne was standing in heaven, and One sitting on the throne. 3And He who was sitting was like a jasper stone and a sardius in appearance; and there was a rainbow around the throne, like an emerald in appearance.

4Around the throne were twenty-four thrones; and upon the thrones I saw twenty-four elders sitting, clothes in white garments, and golden crowns on their heads. 5Out from the throne come flashes of lightening and sounds and peals of thunder. And there were seven lamps of fire burning before the throne, which are the seven Spirits of God;

The verses that follow continue to describe the throne room of God. We pick it back up from verse 9, where it states... 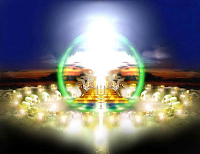 9And when the living creatures give glory and honor and thanks to Him who sits on the throne, to Him who lives forever and ever, 10the twenty-four elders will fall down before Him who sits on the throne, and will worship Him who lives forever and ever, and will cast their crowns before the throne, saying, 11'Worthy are You, our Lord and our God, to receive glory and honor and power; for You created all things, and because of Your will they existed and were created.'" (Revelation 4:1-5, 9-11 NASB)

This part of John’s vision is significant for the following reasons:

Although we cannot positively identify who these 24 elders are, what we can be sure of is that they have already been given their robes and have received their crowns; something that happens AFTER the rapture of the bride of Christ.

Here are the words of Dr. H.A. Ironside that I found very helpful:

But now the fourth verse brings before us a sight never beheld in heaven on any previous occasion: twenty-four thrones (not merely “seats”) surrounding the central throne, and upon them twenty-four elders seated with victors’ crowns (not diadems) upon their heads, and clothed in priestly robes of purest white. Who are these favored ones gathered around the glorious central Being? I do not think we need be in any doubt as to their identity, if we compare Scripture with Scripture and distrust our own imagination, which can but lead us astray.

In I Chronicles, chapter 24, we read of something very similar; and again I would remind you that many of John’s first readers were Hebrews, thoroughly familiar with the Old Testament. Can we question for a moment that every Jewish believer would instantly remember the twenty-four elders appointed by King David to represent the entire Levitical priesthood? He divided the priests into twenty-four courses, each course to serve for two weeks at a time in the temple which Solomon was to build. The same arrangement was in force when our Lord’s forerunner was announced.  Zacharias was “of the course of Abiah,” the eighth in order (Luke 1:5).  The priests were many thousands in number; they could not all come together at one time, but when the twenty-four elders met in the temple precincts in Jerusalem, the whole priestly house was represented. And this is the explanation, I submit, of the symbol here. The elders in heaven represent the whole heavenly priesthood – that is, all the redeemed who have died in the past, or who shall be living at the Lord’s return. In vision they were seen – not as a multitudinous host of millions of saved worshipers, but just twenty-four elders, symbolizing the entire company. The church of the present age and Old Testament saints are alike included. All are priests. All worship. There were twelve patriarchs in Israel, and twelve apostles introducing the new dispensation. The two together would give the complete four and twenty.

Then, observe further: these persons are not angels. They are redeemed men who have overcome in the conflict with Satan and the world, for they wear victors’ wreaths upon their brows. Angels are never said to be “crowned,” nor have they known redemption.

There are two kinds of crowns mentioned in this book:
- The victor’s crown (Stephanos)
- The ruler’s crown (Diadem)

The former is the word here used. It refers to the wreath, of laurel or of pine, bound about the brow of the victor in the Greek games; it is the same word so often used in the New Testament when reward for service is the theme.

And now, note carefully: no saints will ever be crowned until the apostle Paul receives that crown of righteousness which the Lord revealed to him as his reward. In II Timothy 4:8, he says: “Henceforth there is laid up for me a crown of righteousness, which the Lord, the righteous Judge, shall give me at that day; and not to me only, but unto all them also that love (or, have loved) His appearing.”

The expression “at that day” refers to the day of Christ, when He shall come for His own, and they will all be manifested before His judgment-seat. He says: “Behold, I come quickly, and my reward is with Me, to give every man according as his work shall be” (Revelation 22:12).

Surely it follows then that no rewards are given out till He returns for His saints. Therefore there can be no crowned elders in heaven till after the rapture… I trust it is clear to all that the elders are the heavenly saints, surrounding the Lord in glory, God the Son sitting on the central throne.

So if we take Revelation in chronological order, the Rapture takes place before the Tribulation and the outpouring of God's wrath.

You can read the other parts of this series by clicking on one of the articles below:

Why I Believe In A Pre-Tribulation Rapture Pt. 2 - Noah, Lot and Rabbit Holes

Why I Believe In A Pre-Tribulation Rapture Pt. 4 - The Apostasy or Falling Away


Repent and be forgiven! Believe and be saved!
TribulationHarvest.net