I am aware that there has been debate among born again believers as to what the objects are that descend upon the earth at the time of the second and third trumpet judgments.

Rev. 8:10-11  ″The third angel sounded, and a great star fell from heaven, burning like a torch, and it fell on a third of the rivers and on the springs of waters. 11The name of the star is called Wormwood; and a third of the waters became wormwood, and many men died from the waters, because they were made bitter.”

What is this object?

As an NEO enters Earth's atmosphere, the friction begins to burn off the outer layers of the object.  You can see this with the naked eye as this process lights up the sky. The object leaves a trail of fire and smoke as it plunges toward it's final destination.  It will either burn up and/or explode in the atmosphere, or it will continue burning until it makes impact.  This size of such objects varies, but these NEO's can be massive! The color of the object can give us clues as to what the NEO is mainly comprised of, but there is no telling what this object is specifically made of unless it leaves traces that can be tested. 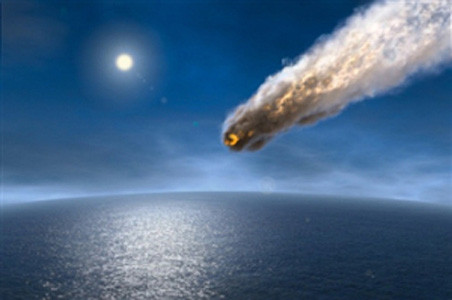 If you compare the two objects, the nuclear warhead and the NEO, then it seems that the latter would best describe what the writer is seeing.

Why I believe it's NOT a nuclear warhead, but is, instead, an NEO

So, that's my take on the subject.  I have avoided going to any other web site to review what their thoughts are because I didn't want my own thoughts on the matter to be influenced by other people's opinions.  I'm sure there are many others who have put more time and effort in seeking the answers to the same question than I have.

Repent and be forgiven! Believe and be saved!
TribulationHarvest.net
Posted by Ken Souza at 5:41 PM No comments: