Was Jesus Really A Carpenter?

The only references we have to Jesus’ vocation are the two times when He’s called a tekton or the son of a tekton (the word often translated “carpenter”).

“Is not this the carpenter (tekton), the son of Mary, the brother of James, and Joses, and of Juda, and Simon? and are not his sisters here with us?  And they were offended at him."  (Mark 6:3). 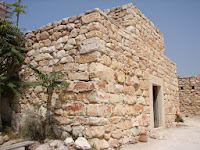 Modern tradition would consider a "builder" or "one who works with his hands" to be a carpenter, since modern structures are built with wood, but we need to remember the point in history when these letters were written.  The majority of structures in the Nazareth area in that era were built of stone, the same material that Nazareth had no shortage of.  In fact, wood would have been an expensive commodity, so it is probably unlikely that Jesus would have worked extensively with that material.

Of course, when building a home, wood was used, so Jesus could have worked with wood as well (making windows, doors, etc...).

Another hint that Jesus may have worked with stone are the many references He made to stones and rocks:

And saith unto him, If thou be the Son of God, cast thyself down: for it is written, He shall give his angels charge concerning thee: and in their hands they shall bear thee up, lest at any time thou dash thy foot against a stone. Matthew 4:6

Or what man is there of you, whom if his son ask bread, will he give him a stone?  Matthew 7:9

Therefore whosoever heareth these sayings of mine, and doeth them, I will liken him unto a wise man, which built his house upon a rock: And the rain descended, and the floods came, and the winds blew, and beat upon that house; and it fell not: for it was founded upon a rock.  Matthew 7:24-25

And I say also unto thee, That thou art Peter, and upon this rock will I build my church; and the gates of hell shall not prevail against it.  Matthew 16:18

Jesus saith unto them, Did ye never read in the scriptures, The stone which the builders rejected, the same is become the head of the corner: this is the Lord's doing, and it is marvelous in our eyes?  Matthew 21:42

And whosoever shall fall on this stone shall be broken: but on whomsoever it shall fall, it will grind him to powder. Matthew 21:44

And he brought him to Jesus.  And when Jesus beheld him, he said, Thou art Simon the son of Jona: thou shalt be called Cephas, which is by interpretation, a stone.  John 1:42

Even from the moment of His birth, rock may have been an important part of His life.  Joseph and Mary placed Him in a feeding/watering trough when He was born.  Could this trough had been made of stone?

Jesus was even buried in rock:

And when Joseph had taken the body, he wrapped it in a clean linen cloth, And laid it in his own new tomb, which he had hewn out of the rock: and he rolled a great stone to the door of the sepulchre, and departed.  Matthew 27:59-60

Paul described Jesus as a "rock."

And did all drink the same spiritual drink: for they drank of that spiritual Rock that followed them: and that Rock was Christ.  1 Corinthians 10:4

How was this word translated in some of the earliest English translations? In the Wycliffe bible, tekton, in Mark 6:3 was translated, "carpenter" [smith or carpenter], and in Matthew 13:55, it was translated as "carpenter." I suppose that even the early translators of the scriptures were confused as well, knowing that these Hebrew and Greek words used to describe Jesus weren't specific enough to clarify what type of "tekton" He was.


Whether Jesus was a carpenter or a stone mason is one question that will remain unanswered until we're together with Him in the clouds.  Whatever the answer may be, it sure provides some interesting conversation, doesn't it?

Don't be shy about leaving your own opinion.  I'd really like to know what you think.


Repent and be forgiven! Believe and be saved!
TribulationHarvest.net
Posted by Ken Souza at 12:08 PM