The Beating, The Whipping, And The Crucifixion

This article was written with the expectation that readers, like yourself, have more or less come to the conclusion that Jesus is an actual historical figure and that your study of the Bible, the writings of other Christian authors, or the writings of secular scholars, historians and/or philosophers have convinced you of this. You are not alone. The majority of secular historians no longer argue this point. They, too, believe that Jesus was a real man who lived approximately 2,000 years ago. It is also becoming clear that the Bible can be relied upon as being accurate and reliable. More about that in a future article.

This article briefly describes the physical torture that Jesus endured from the moment of His betrayal to His death on the cross. Whether Jesus was just a man or was fully man and fully God is a personal decision that everyone needs to make for themselves. This is just one of a series of articles that will culminate in one or two articles that will bring all of this information together. 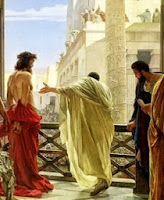 Jesus had been betrayed (Ps. 41:9/Mt. 26:20-25). Judas singled Jesus out with a kiss on His cheek. And the price? Judas carried with him the 30 pieces of silver that had already been paid to him for his betrayal (Zech. 11:12/Mt. 26:15). Approaching were some of the chief priests, temple officers and elders. They arrested Jesus, which caused his disciples to flee into the darkness of the night out of fear that they, too, would be arrested.

Jesus was bound and brought before Annas, the father-in-law of Caiaphas, who was the high priest that year. While being questioned, Jesus was slapped in His face for what they deemed a disrespectful response. This would be the first strike of many. Jesus was then brought before Caiaphas, the chief priests and the elders. As they proceeded, false witnesses were called forward to make known their accusations. Jesus was eventually declared guilty of blasphemy because He dared call Himself the Son of God. Those in attendance covered His face, spit on Him, struck Him, slapped Him and mocked Him. Even the guards beat Him (Isa. 50:6/Mt. 26:67-68).

Following this physical assault, Jesus was taken to Pilate, who spoke with Him. After refusing to respond to any of the charges made against Him by the Jewish leaders (Isa. 53:7/Mt. 27:12-14), Pilate sends Jesus to Herod questions Jesus as well, but again Jesus does not respond to the charges made against him (Isa. 53:7/Lk. 23:8-10). Herod and his men treat Jesus with contempt, mocking Him as they dressed Him up in fine clothing, like royalty. Jesus is then sent back to Pilate dressed in that manner.

Pilate is amused with Herod’s display of mockery. Their shared contempt of Jesus causes an instant bond of friendship between the two of them (Luke 23:12).

Pilate, since he could find no reason to give Jesus the death sentence, assumed that a severe whipping would be sufficient to placate the Jewish leaders, so Jesus is handed over to the guards, a full battalion, who gather together for what they consider the day’s entertainment.

One soldier fashions a crown of thorns and presses it into the flesh on Jesus’ head. They then strip Jesus and clothe Him in a scarlet robe. They put a reed, like a scepter, in His right hand. Then they begin saluting and bowing to Him, laughing and yelling, “Hail, King of the Jews!”

They blindfold Him, spit on Him and continue to mock Him. Then they begin beating Him with their fists. The Roman soldiers do their job well as they pummel Jesus (Isa 50:6/Mt. 26:67-68). Once they have had their fill of fun, they remove the scarlet robe that they had put on Him to mock Him, and they dress Him in His own clothing. After experiencing two physical assaults, being beaten about the head, face and body, Jesus is about to experience a more severe punishment.

Sore and bleeding, His face swollen and bruised practically beyond all recognition, Jesus was bound to a pole or a stump. The whipping that Jesus was about to endure was more than just a few strikes with a leather whip. It was a brutal act meant to cause serious bodily harm and severe pain.

The instrument of punishment used by the Romans to scourge their victims was called a flagrum. Attached to the leather straps were pieces of sharp bone and metal, which would tear into and lacerate human flesh. It was created to do damage!

“…veins were laid bare, and… the very muscles, sinews and bowels of the victim were open to exposure.” (Bishop Eusebius of Caesarea, 3rd century historian)

Although Jewish law limited the number of lashings a person could receive, the Romans did not have such limitations. The victim was at the mercy of his punisher, however long he chose to extend the punishment.

The severe wounds Jesus received would never have time to close or to heal, because Jesus was never allowed to rest or recuperate. Shortly after they whipped Him, He was on the move again, being brought before Pilate and before the crowd. Then the judgment… “Crucify Him!” Wounds still fresh and being forced open as he moved, he was led away.

Jesus, being led through the streets to His execution, managed to carry the cross, but not for long. The blood loss and the physical damage to his body from the beatings, the whipping and the lack of food and water brought Him to the point of near death. Another man, Simon of Cyrene, was forced to carry the cross that Jesus was too weak to carry. All this torture was a prelude to the horror that was about to unfold.

The Romans weren't unfamiliar with crucifixions or death. They were experts at both. The suffering endured on the cross was intense and severe. In Jerusalem, it began with carrying your own torture device, the cross, through the streets, out of the city and up a hill. Jesus, drained of blood and strength, could not manage this task for long. As I already mentioned above, that task was forced upon another.

At the crucifixion site, Jesus would have been stripped naked, the fabric of his clothing brushing over His open wounds causing Him additional pain. He would have then been laid on top of the cross, the wood pressed against the inflamed and swollen lacerations, causing fresh blood to seep from them.

Then the huge nails, driven into his hands and feet, brought the new pain of metal puncturing flesh, causing wounds that expel even more of His precious blood (Ps. 22:16/Lk. 23:33). Bleeding from His head, His body and the new wounds to His hands and feet, He’s lifted up until the cross is vertical and His body is displayed for all to see.

Suffocation, dizziness, cramping, thirst, hunger, shame of His nakedness, blood loss, raw exposed nerves… all endured by Him. Eventual death on the cross was inevitable, but His injuries and dehydration would quicken the process. Every breath was painful and laborious and He would need to use His legs to lift Himself up for every breath He took. Eventually, the loss of blood, the torture and anxiety He suffered eventually becomes too much for His human body to withstand. The centurion, standing in front of the cross, watched Jesus take His last breath. Jesus dies of what can be described as a *cardiac rupture (Ps. 22:14/Jn. 19:34)

Jesus hung from the cross, His life drained from Him. The Sabbath was quickly approaching. It was already the 9th hour (3:00 PM) and Jewish law demanded that He be buried before the Sabbath began. The Romans, seeing that Jesus was already dead, did not break His legs, but instead thrust a spear into his right side (Isa. 53:5, Zech. 12:10/Jn. 19:34), which caused blood and water to flow. The Romans, masters of death, recognized a dead man when they saw one. Pilate sent a guard to the crucifixion site to double check whether or not Jesus was truly dead. Pilate then released Jesus’ body to Joseph of Arimathea.

*An article in JAMA concluded from the Gospel accounts that Jesus certainly had died before He was removed from the cross: “clearly, the weight of historical and medical evidence indicates that Jesus was dead before the wound to His side was inflicted and supports the traditional view that the spear, thrust between His right ribs, probably perforated not only the right lung, but also the pericardium and heart and thereby ensured His death. Accordingly, interpretations based on the assumption that Jesus did not die on the cross appear to be at odds with modern medical knowledge.” (Edwards, PDJC 1463)

*Samuel Houghton, M.D., the great physiologist from the University of Dublin, relates his view on the physical cause of Christ’s death: “When the soldier pierced with his spear the side of Christ, He was already dead; and the flow of blood and water that followed was either a natural phenomenon explicable by natural causes or it was a miracle… Death by crucifixion causes a condition of blood in the lungs similar to that produced by drowning… A copious flow of blood, succeeded by a copious flow of water… would occur in a crucified person, who had died upon the cross from rupture of the heart… there remains, therefore, no supposition possible to explain the recorded phenomenon except the combination of the crucifixion and rupture of the heart.”

Part two of this series can be found by clicking HERE.

This article will be updated with more scriptural references and links to additional information as time permits.


Repent and be forgiven! Believe and be saved!
TribulationHarvest.net
Posted by Ken Souza at 9:44 AM