How we define ourselves goes a long way in determining what kind of Christian we are and are to become. We can be focused so much on the sin that plagues our life that we tend to let the sin define who we are. I would like to focus on a label that continues to be a major issue to the church... gay Christians.

Let's just look at the label, “gay Christian.” The word, “gay,” describes the Christian, making their sexual identity more important than their “Christian” identity. There is a difference between being a “gay Christian” and being a “Christian who struggles with same sex attraction.” One places the focus on 'self' and the other on 'Christ.' It's all semantics, isn't it? No, it's not.

I've seen Christians give up the fight and settle confidently into a gay relationship, boasting online and in public how satisfied they are in their new found freedom. How could that happen? How could someone who was fighting the good fight suddenly give up on what they confessed was a sinful lifestyle? The answer is complicated. For some, it begins by doubting God and who He really is. For others, it begins by questioning God's word. It begins by imagining what it would be like to stop fighting a battle that's taken so much effort to wage, making them feel weary and weak. It begins by wanting to come out of the shadows and finally reveal a secret that they have tried so hard to keep hidden from everyone for so many years.

You see, during this time, the enemy is interfering with their thought process. He's trying to steer them into a “Garden of Eden” moment when they will listen to his subtle lies mixed with truth, a twist of scripture, a moment of doubt, a promise of something better. Eventually, the individual begins to believe the lies. Maybe God made them this way and this is the lifestyle God chose for them. Maybe those scriptures they stood on in the battle with the enemy don't really mean what Christians say they mean. Christ never specifically spoke out against homosexuality. John and Jesus loved each other. The scriptures in the OT that forbade homosexuality are law, and we are no longer under the law. Love is love, right? So it doesn't matter who you're with as long as you love them.

They forget that the enemy is the father of lies. He's been a liar from the beginning of time and he continues to lie. For the Christian who fights same sex attraction, a twist of scripture, a change of view, and the promise of ending the battle is so tempting, but as we know, it's also a path to destruction. God doesn't just call homosexuality a sin, He calls it an “abomination.”

When they embrace the gay lifestyle, their god is no longer the God of the bible, but a false god; a god they've created who resembles the one true God, but is, in fact, a counterfeit. The god they create is a god who accepts their lifestyle as ordained by him; a lifestyle that is blessed, not sinful. Their lives are no longer lead by the Holy Spirit, but by self. They dismiss conviction, quenching the Spirit, attempting to smother His voice while turning up the volume on the voice that keeps assuring them that they are going in the right direction. Many of their decisions (politics, education, spirituality, etc...) now become based on what would be beneficial in promoting and/or normalizing their chosen lifestyle instead of what Jesus would command they should do.

How we identify ourselves is important because it sets the stage for the decisions we make in the present, which will affect our future. Are you defined by who you are in the world or who you are in Christ? Are you a 'gay Christian' or are you a 'Christian battling same sex attraction?' Will you continue to fight the good fight and endure to the end? 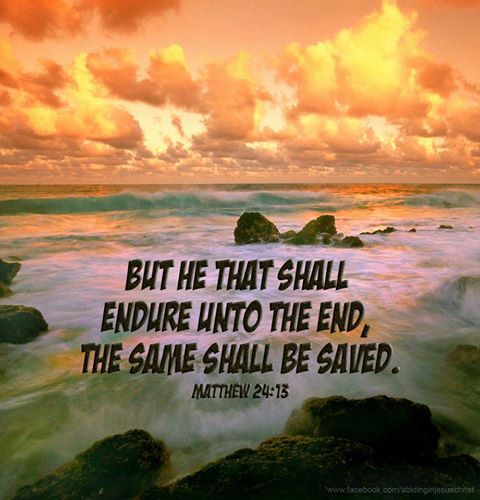 Don't let your same sex struggle define who you are. Put Jesus first and remind yourself often that there is a reward waiting for you when you complete this race. The fight may be difficult and you may feel you are living a life that is contrary to what your sexual attraction may be, but God will either deliver you from those desires or give you the strength every day to endure. The most important thing to do is to keep Jesus at the center of your life, the center of your attention. Read His word. Talk with Him and open your heart to Him. Having same sex attraction isn't sinful. Acting upon those desires is. Be strong in the Lord!!!

You can also follow the following link to my YouTube channel. Please consider subscribing to that channel. If you do, please hit the notification bell so that you will be notified when I post a new video. MY YOUTUBE CHANNEL

Repent and be forgiven! Believe and be saved!
TribulationHarvest.net
Posted by Ken Souza at 11:24 AM