Contradiction In The Bible? - Jesus Birth

Here is the story we've heard time and time again:

When Jesus was born, God sent His angels to proclaim His birth; the birth of our Savior and King. They are told to find the babe wrapped in swaddling clothes in a manger. The shepherds go to see their new born King, and marvel at how they were among the first to know of His birth.

Believe it or not (and I hope you believe this) there is nowhere in the word of God that states that they arrived on the night of Jesus’ birth. Take a look at the two portions of scripture that seem to be in conflict with one another; 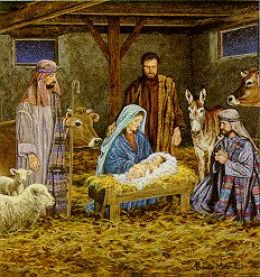 Luke 2:7-20 ”And she brought forth her firstborn son, and wrapped him in swaddling clothes, and laid him in a manger; because there was no room for them in the inn.  8 And there were in the same country shepherds abiding in the field, keeping watch over their flock by night.  9 And, lo, the angel of the Lord came upon them, and the glory of the Lord shone round about them: and they were sore afraid.  10 And the angel said unto them, Fear not: for, behold, I bring you good tidings of great joy, which shall be to all people.
11 For unto you is born this day in the city of David a Savior, which is Christ the Lord.  12 And this shall be a sign unto you; Ye shall find the babe wrapped in swaddling clothes, lying in a manger.  13 And suddenly there was with the angel a multitude of the heavenly host praising God, and saying,  14 Glory to God in the highest, and on earth peace, good will toward men.  15 And it came to pass, as the angels were gone away from them into heaven, the shepherds said one to another, Let us now go even unto Bethlehem, and see this thing which is come to pass, which the Lord hath made known unto us.  16 And they came with haste, and found Mary, and Joseph, and the babe lying in a manger.  17 And when they had seen it, they made known abroad the saying which was told them concerning this child.  18 And all they that heard it wondered at those things which were told them by the shepherds.  19 But Mary kept all these things, and pondered them in her heart.  20 And the shepherds returned, glorifying and praising God for all the things that they had heard and seen, as it was told unto them. 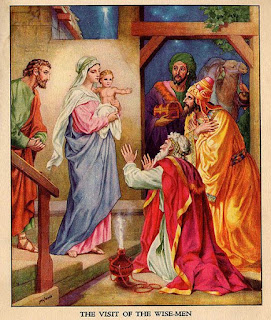 Matthew 2:1-12  “Now when Jesus was born in Bethlehem of Judea in the days of Herod the king, behold, there came wise men from the east to Jerusalem, 2 Saying, Where is he that is born King of the Jews? for we have seen his star in the east, and are come to worship him.  3 When Herod the king had heard these things, he was troubled, and all Jerusalem with him.  4 And when he had gathered all the chief priests and scribes of the people together, he demanded of them where Christ should be born. 5 And they said unto him, In Bethlehem of Judea: for thus it is written by the prophet, 6 And you Bethlehem, in the land of Judah, are not the least among the princes of Judah: for out of you shall come a Governor, that shall rule my people Israel.
7 Then Herod, when he had privately called the wise men, inquired of them diligently what time the star appeared.  8 And he sent them to Bethlehem, and said, Go and search diligently for the young child; and when you have found him, bring me word again, that I may come and worship him also.  9 When they had heard the king, they departed; and, lo, the star, which they saw in the east, went before them, till it came and stood over where the young child was.
10 When they saw the star, they rejoiced with exceedingly great joy.  11 And when they came into the house, they saw the young child with Mary his mother, and fell down, and worshiped him: and when they had opened their treasures, they presented unto him gifts; gold, and frankincense, and myrrh.  12 And being warned of God in a dream that they should not return to Herod, they departed into their own country another way.”

So, did you catch the subtle differences? The account of Jesus’ birth in Luke uses the words “babe” and “manger” and the account of the Magi’s arrival uses the word “child” and "house.” The Magi were not included in Luke’s account and the shepherds were not included in Matthew’s account. This is where some people (Christians and non-believers alike) point out the conflict and say that the bible is full of contradictions, with this being just one example.  Let me try to explain the subtle differences between these two accounts.

The reason for the missing Magi in Luke and the missing shepherds in Matthew is simple… these are accounts of two totally different events separated by perhaps a year or more. Impossible? Let’s delve a little deeper into these two portions of scripture.

In Luke, the word “babe” is used to describe Jesus. In Matthew, the word “child” is used. You may assume that these two words mean the same, especially if you’re mashing these two separate accounts together into one story. Let’s take a look at what Strong’s says:

From the definitions above, we can see that it was the shepherds who saw Jesus just after His birth and the Magi saw Jesus later, when he was a little older; as old as 2 years old.

Still on the fence about the entire issue? Here is another piece of information that often gets overlooked.

In Luke’s account, the shepherds go to see the new born King laying in a manger: “And they came with haste, and found Mary, and Joseph, and the babe lying in a manger.” Luke 2:16

In Matthew’s account, the Magi travel to see Jesus at his house: “And when they came into the house, they saw the young child with Mary his mother, and fell down, and worshiped him: and when they had opened their treasures, they presented unto him gifts; gold, and frankincense, and myrrh.” Matthew 2:11

So we have the account in Luke where an angel appears before shepherds, announce Jesus’ birth, and direct the shepherds to seek Him out in Bethlehem.  They arrive and find the baby Jesus wrapped and in a manger and they glorify God.

The account in Matthew finds the Magi seeking the “young child.” They are directed to Bethlehem and when they get there, they find Jesus and Mary living in a house, which they enter and present their gifts.

Do you need a little more convincing? Okay, if the star appeared on the night of Jesus birth, then Jesus was probably 1 year old or a little older when the wise men arrived at His home. After all, there was some studying and some research that these wise men had to perform before they even contemplated traveling to where the star would lead them.

Here’s what happened a little further on in the second chapter of Matthew: "Then Herod, when he saw that he was mocked of the wise men, was exceeding wroth, and sent forth, and slew all the children that were in Bethlehem, and in all the coasts thereof, from two years old and under, according to the time which he had diligently inquired of the wise men. 17 Then was fulfilled that which was spoken by Jeremiah the prophet, saying, 18 In Rama was there a voice heard, lamentation, and weeping, and great mourning, Rachel weeping for her children, and would not be comforted, because they are not." Matthew 2:16-18

And now the story is complete. Jesus was born and lay in a manger where the shepherds were directed to go. The Magi followed the star that appeared on the night of Jesus’ birth and found their way to Bethlehem almost two years after the star appeared. Herod, in his anger, gave an order to slaughter all children 2 years old and under in relation to when the star first appeared (on the night of Jesus' birth).

As you can see, some traditions have taken on a life of their own. So the next time you see a depiction of the three wise men arriving at the manger on the night of Jesus' birth, remember that scripture doesn't agree with this narrative. It didn't happen that way.

Repent and be forgiven! Believe and be saved!
TribulationHarvest.net
Posted by Ken Souza at 4:18 PM