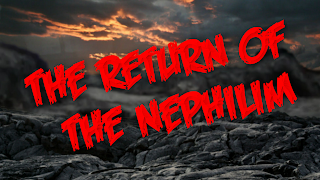 Adding to the word of God is a very serious thing. I briefly hit upon this subject in one of my previous posts: The Spirit Of Python Is A Spirit Of Divination And Nothing More.  In that article, I shed light on all the false teachings out there concerning the spirit of python, and how a spiritual truth was being distorted and taught as biblical truth. The same thing seems to have happened with this idea that Nephilim will appear again during the end times. This false teaching has been around for quite some time. Here is the scripture that everyone seems to cling to when claiming that there will be Nephilim during the end times:

26And as it was in the days of Noe, so shall it be also in the days of the Son of man. 27They did eat, they drank, they married wives, they were given in marriage, until the day that Noe entered into the ark, and the flood came, and destroyed them all. (Luke 17:26-27)

God has said that in the days of the Son of man, life will be as it was in the days of Noah. Well, what does that mean exactly? God answers that question in the very next verse: "They did eat, they drank, they married wives, they were given in marriage..." Everything was going on as usual, "...until the day that Noe entered into the ark, and the flood came, and destroyed them all." So God explains what He meant when He said that the end times will be just as it was in the time of Noah.

Q: Well wait, where do the Nephilim come into the picture?
A: They don't. God doesn't mention them, but that doesn't stop false teachers from cutting and pasting the Nephilim in to this end time prophecy.

Let's read the next few verses in that same chapter where God immediately gives us another example:

28Likewise also as it was in the days of Lot; they did eat, they drank, they bought, they sold, they planted, they bulided; 29But the same day that Lot went out of Sodom it rained fire and brimstone from heaven, and destroyed them all. 30Even thus shall it be in the day when the Son of man is revealed. (Luke 17:28-29)

So, in Lot's time, they were eating, drinking, buying and selling, planting and building, living their lives as they usually did on a daily basis. There was no warning judgment was coming just as there was no warning in the time of Noah.

Do you see any Nephilim mentioned? No, you don't. Read Luke chapter 17 yourself. Any mention of Nephilim in that entire chapter? Again, no. Why? The reason they're not mentioned is because they're not part of end time prophecy. The Nephilim aren't even on God's radar in Luke chapter 17. On the contrary, God is giving us a picture of what it will be like when Jesus returns. Everyone will be living life as usual. Eating, drinking, marrying, working, going to the store, etc... God isn't warning us about Nephilim, He's telling us that Jesus' return will be totally unexpected and that judgment will come upon the world at a time when no one expects it.

Although there are many born again believers online who would have you believe that the Nephilim are part of this prophecy, it's just can't be supported by scripture. Ask yourself this question: If this teaching about Nephilim appearing during the end times is not supported by scripture, then what kind of teaching is this? Answer: It's a false teaching.

Let's look at it from the perspective of those who hold true to this false teaching. They will say, "Well, it doesn't necessarily mention the Nephilim, but they were alive at that time, so when God says that it will be the same during the end times as it was during Noah's or Lot's time, then logically it must also mean that the Nephilim will be around. God says, 'As it was in the days of Noah...'" WARNING!!! That's when they will begin using flawed human intellect to lead you down a rabbit hole and away from biblical truth to convince you to believe in something that isn't biblically sound and cannot be found in scripture. They'll explain to you that other things were happening at the time of Noah as well, so they must be included in this prophecy. If you listen carefully to what they have to say, you'll find that their logic is based on pure conjecture, and that their claim is in no way based on scripture.

Using their flawed logic, dinosaurs would also appear during the end times because dinosaurs were alive before the flood. If we're going to cut and paste Nephilim to the picture, then we have to do that with everything else, including dinosaurs, because God said, "As it was in the days of Noah..."

Do you see where I'm going with this? Just as dinosaurs aren't going to return, neither will the Nephilim, because IT'S NOT SCRIPTURAL! What's one of the basic rules of bible study? You must interpret scripture in context. I had a friend who used to misquote scripture all the time, taking things totally out of context and using it haphazardly, like a child clumsily wielding a toy sword. It was not only annoying, but she truly believed that what she was saying was biblically sound.

Misquoting scripture, or adding to scripture, shows a lack of wisdom, knowledge, and understanding of God and of His word. I guarantee you that many people who believe in the return of the Nephilim will take great exception to this article, but that's because they don't have scriptural truth to back up their claims of returning Nephilim, and they can't defend themselves with solid scripture references, so they'll angrily defend their indefensible position.

That's really all the time I'm willing to give to this false teaching. It's pretty straight forward. I urge you to stay away from any teaching that can't be supported by scripture and I warn you  not to let false teachers lead you down a rabbit hole of flawed human intellect disguised as spiritual teaching.

God bless and please feel free to leave a comment down below. All comments are held for review before posting, so if your comment doesn't immediately appear, don't fret.

REPENT AND BE FORGIVEN!
BELIEVE AND BE SAVED!