Land for peace? You've got to be joking! The world is demanding that Israel give up even more land to its enemies in order to bring peace to the Middle East. Is history to be repeated again? 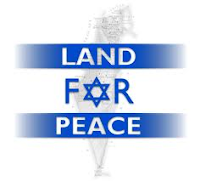 One of the most famous “Land for Peace” agreements was between Britain and Germany. September 15, 1938: British Prime Minister Neville Chamberlain set out for Germany to visit Adolph Hitler. Hitler wasn't asking for too much, just the liberation of the German-speaking areas of Czechoslovakia [the western part of Czechoslovakia called Sudetenland]. It was a sweet little "Land for Peace" deal that would hopefully appease the Fuhrer and give the German-speaking Czechs their "rights of self-determination", albeit under Nazi control. Fifteen days later the Sudetenland was handed over to Hitler. In exchange, Hitler gives his word that he has no other territorial designs on Europe.

The following year Hitler invaded Poland. He continued to invade most of Europe, Africa, and Russia and even bombed Chamberlain's very own Britain. Needless to say, the duped Chamberlain was replaced rather quickly by Winston Churchill. The Brits had THEIR fill of "Land for Peace!" And that was just one example!
The policy of "Land for Peace" logically entails the surrender of Israeli territory whenever Arabs threaten war. As anyone may see from the US House of Representatives Task Force Report on Terrorism and Unconventional Warfare issued on December 10, 1996, the territorial shrinkage of Israel following the Oslo peace process has triggered a "frantic military build-up" by Arab and Islamic states that now see an opportunity to annihilate the Jewish State.

Question: Can Israel be certain that peace will never be withheld again by those who receive the land?
Question: What will happen if surrendering land reduces Israel’s ability to defend itself from those who will occupy the surrendered land?

Many may say, “Well, we won’t know until we try.” And if it fails, it will be too late to save the country and its people. Israel will be gone.

Fortunately, biblical prophecy does state that although Israel will be attacked in the future by a large and powerful coalition, God will intervene and destroy all but one sixth of the attacking forces, saving Israel and bringing glory to His name.

Praise be to the Lord God Almighty!!!

Repent and be forgiven! Believe and be saved!