Why I Believe In A Pre-Tribulation Rapture Pt. 4 - The Apostasy or Falling Away 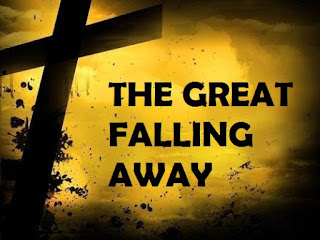 How many of us have read 2 Thessalonians 2:1-5 and were confused when studying the subject of the Rapture? Some who read this portion of scripture are convinced that it shows that the Rapture cannot occur pre-Tribulation because the "day of Christ" comes AFTER a falling away and the Antichrist is revealed. Somehow, this didn't sit well with me because I believe in a pre-Tribulation Rapture. Could I be wrong? If not, how do I reconcile this scripture with my understanding of the Rapture?

I'm one for allowing my long held beliefs to be challenged. In fact, I find that many of those beliefs weren't even rooted in scripture, but were church traditions. Of course, some were based on incorrect understanding of the scripture itself.

This is a case of the latter. There are two things we need to focus on here. We need to discuss what the "day of Christ" is and we need to look at the original Greek word that has been translated "a falling away." Only then can we read this portion of scripture in context and see it's true meaning.

Here is the scripture being discussed:

2 Thessalonians 2:1-5 "Now we beseech you, brethren, by the coming of our Lord Jesus Christ, and by our gathering together unto him, 2That ye be not soon shaken in mind, or be troubled, neither by spirit, nor by word, nor by letter as from us, as that day of Christ is at hand.  3Let no man deceive you by any means: for that day shall not come, except there come a falling away first, and that man of sin be revealed, the son of perdition;  4Who opposeth and exaulteth himself above all that is called God, or that is worshiped; so that he as God sitteth in the temple of God, shewing himself that he is God.  5Remember ye not, that, when I was yet with you, I told you these things?" KJV

There are only five verses here, but these five verses say so much. Let's take this in piecemeal. We have to begin in the middle, in verse 3, in order to understand the other verses wrapped around this one.

The Falling Away
"Let no man deceive you by any means: for that day shall not come, except there come a falling away first, and that man of sin be revealed, the son of perdition;"

The Greek word being used here is, "apostasia." It is being translated in English as, "a falling away." What if that isn't the correct translation? I have listened and read teachings on this particular subject and have come to the realization that my long held interpretation of this phrase is incorrect. In earlier versions of the bible, this word was translated not as "a falling away," but as "the departure." Whoa! Yeah... it blew my mind when I sat there and re-read the verse using those words instead. This is what I mean: "Let no man deceive you by any means: for that day shall not come, except there come the departure first, and that man of sin be revealed, the son of perdition;"

So if the true translation is "the departure" and not "a falling away," then that makes a huge difference in how this scripture, taken in context, is understood.

That Day Of Christ

Many look to the words "that day of Christ" as reference to the Rapture. Could this be true? Let's take a closer look.

What is the mental state of the believers in Thessaloníki at this point? Here's what Paul writes:

"Now we beseech you, brethren, by the coming of our Lord Jesus Christ, and by our gathering together unto him, 2That ye be not soon shaken in mind, or be troubled, neither by spirit, nor by word, nor by letter as from us, as that the day of Christ is at hand."

They were shaken down to their core. What would cause such a severe negative reaction in them? If they believed that the "day of Christ" was the Rapture that they were about to experience, then why would the body of believers be "shaken in mind" or "troubled?" That just doesn't make sense. Could it be that the "day of Christ" mentioned here is not referring to the Rapture but, instead, is referring to the time of Jacob's trouble... Daniel's 70th week... the Tribulation? Could it be that they believed that they had missed the great catching away and that they were living through the coming judgment, the day of Christ, that they had been warned was coming?

The believers in Thessaloniki at that time were worried that the "day of Christ" had come (the Tribulation) and Paul had to correct them. If I could be so bold as to paraphrase Paul, he basically told them, "Hey, we already spoke to you about the Lord's promise to gather together both those who have gone before us and for us as well, so don't fret about what you're hearing from people giving you false information or saying that we wrote letters to the fact that the Tribulation ("day of Christ") has begun. The Tribulation isn't going to begin until after "the departure" and after the Antichrist is revealed." He then briefly describes the Antichrist and then reminds them in verse 5 that while he was with them, he explained it to them.

If you go back to Paul's first letter to the church in Thessaloniki, you'll see that he never spoke to them about "a falling away," but he did speak to them about Jesus returning to gather together the saints: "For the Lord Himself shall descend from heaven with a shout, with the voice of the archangel and with the trump of God: and the dead in Christ shall rise first: 17Then we which are alive and remain shall be caught up together with them in the clouds, to meet the Lord in the air: and so shall we ever be with the Lord. 18Wherefore comfort one another with these words." (1Thess. 4:16-18)

So we can see that the saints in Thessaloniki were petrified that they had missed the Rapture and were now at the beginning of the Tribulation. Paul was calming them down by telling them that the promised Rapture had not yet happened, and that the Tribulation can't begin until it does happen, at which time the Antichrist will be revealed. Then, and only then, can the Tribulation begin.

So Paul's saying, "I already told you, we're going to be gathered together before the Tribulation, so don't listen to false doctrine and the twisted words of men, hold on to what you've already been taught. Remember what I told you before."

There is also the fact that the scripture doesn't contradict itself. Let's look at what Peter said in Acts 2:16-18 "But this is that which was spoken by the prophet Joel: 17And it shall come to pass in the last days, saith God, I will pour out my Spirit upon all flesh: and your sons and your daughters will prophesy, and your young men shall see visions, and your old men shall dream dreams: 18And on my servants and on my handmaidens I will pour out in those days of my Spirit; and they shall prophesy:"

This does not sound like "a falling away," now does it?  People, even now, are saying that we are in the midst of the great falling away, but that conflicts with what is going on in the world today. Actually, it's the exact opposite. Thousands upon thousands of people are coming to Christ every day. Just look at what is going on in Asia and the Middle East and third world countries!

It seems that by interpreting the word "apostasia" as "a falling away" actually contradicts what God said He would do in the last days, and the proof is what is going on in the world today. Where Satan has made inroads into our nation's church system and those in Europe, God is more than making up for that with the influx of new born again believers worldwide.

1 Tim 4:1 speaks of a departure from the faith, but it does not describe a great falling away: "Now the Spirit speaketh expressly, that in the latter time, some shall depart from the faith, giving heed to seducing spirits, and doctrines of devils;" There is a difference between what people expect as a great "falling away" and what Timothy described as "some." Some shall depart from the faith, and that is exactly what has happened, but there are more saints worldwide entering into a relationship with Jesus than there are departing the faith, so I can't support the notion that "a falling away" is the correct interpretation of the Greek word, "apostasia."

Here's another little nugget of information for you. 2 Thessalonians 2:6-7 says: "And now ye know what withholdeth that he might be revealed in his time. 7For the mystery of iniquity doth already work: only he who now letteth will let, until he be taken out of the way."

Meaning? The Holy Spirit is holding back the reign of the Antichrist until He is "taken out of the way." Since God has already promised never to leave nor forsake us, and that we are born of the Spirit (and since scripture cannot contradict itself), the Holy Spirit will not depart unless we go with Him. Sounds an awful lot like the Rapture, doesn't it?

You can read the other parts of this series by clicking on the links below:

Why I Believe In A Pre-Tribulation Rapture Pt. 2 - Noah, Lot, and Rabbit Holes

Repent and be forgiven! Believe and be saved!