Fascinating Information About Preparations For The Third Temple

I just read the book, "The New Temple and the Second Coming" by Grant R Jeffrey. There were a few intesing bits of information that I found fascenating. Some of you who have kept up with recent events surrounding the plans for the Third Temple will undoubtedly find this information redundant, but I know that there are some readers who will find this article informative. Most of what I will write below will be quoted from the book. 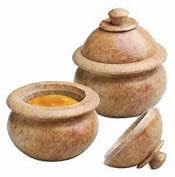 The Discovery of the Oil of Anointing
An archaeological team discovered a clay vessel that contained oil that had solidified to the consistancy of molasses. When the oil was analized, it was shown to be composed of five ingredients, exactly as God commanded Moses (Exodus 30:23-26, 30-31). Intensive testing by the Dept. of Hebrew Univ. established that the oil inside the clay vessel was the ancient oil of anointing. It was given to two chief rabbis of Israel for safe keeping.

One of the five ingredients in this oil is the rare persimmon or balsam (afarsimon) oil. There were only two groves in the whole Middle East where the precious balsom trees grew. When it became apparent that the Romans were going to destroy Jerusalem and the Temple, priests burned the two groves to keep them out of the hands of the Romans. With their destruction, it became impossible to reconstitute the ancient oil of anointing. Without the oil of anointing, it would seem to be impossible to anoint the sacred objects and the priests. However, the discovery of this ancient sample of the oil of anointing makes it possible to anoint the Temple, the sacred vessels and the priests.

Special Blue Dye
The Bible records that many of the special garments, including the avnet-belt of the high priest, must be dyed with a special blue dye known as tchelet. This dye was produced from a rare mollusk found only in the Mediterranean Sea, a marine creature long thought to be extinct. However, in the late 1990's, Israeli divers discovered the mollusk, the hillazon snail, in the Red Sea. A thick liquid is extracted from a gland in the mollusk to produce the rich blue dye. The Temple Institute in Jerusalem has created a supply of the blue dye, which will be used to create the garments required in Temple worship... and used to produce the tsitsit fringes worn by observant Jewish males in the temple. The unspun wool for the priestly robes is dipped in this liquid, turning the wool a bright green. When the new green wool is exposed to the light, it takes on a rich blue color. Once it dries, the wool is spun into a blue thread.

Ashes of the Red Heifer
The Third Temple cannot be built and used for worship until the appropriate area on the Temple Mount is ritually purified using waters of purification from the ashes of an unblemished red heifer. The ashes from the burned sacrifice will be mixed with water, scarlet thread, cedar, and hyssop, producing the waters of purification. Then the priest will sprinkle the water on the stones of the Temple Mount, the priests and the Temple vessels according to the Bible's commands as recorded in Num. 19.

A pure red heifer is very rare... Jewish authorities are raising a number of red heifers in Israel so they will have a qualified candidate when they receive a divine sign that the time has come to rebuild the Temple.

But do we need a red heifer? Could ashes from the last red heifer be found just as the oil of anointing was found?

During the destruction of Jerusalem in 70 AD, priests took the ashes from the Temple in a vessel called the Kalal, a container made with clay and dung from a previous red heifer. The Essene priests buried the container holding the ashes near Qumran, along with a great number of the sacred objects (including the oil of anointing, which has already been discovered). The chief rabbis believe the recovery of the ashes of the red heifer... is key to rebuilding the Temple.

We are witnesses to the fulfilling of numerous prophecies as we live and breathe in this era of biblical history. We are filled with hope as we anticipate the return of our Messiah. We are encouraged by the progress of the Temple Institute and other organizations in retrieving Temple artifacts and discovering clues to the exact location of the First and Second Temples.

I pray for the peace of Israel and the return of Yeshua HaMashiach!

Repent and be forgiven! Believe and be saved!
TribulationHarvest.net
Posted by Ken Souza at 1:45 PM