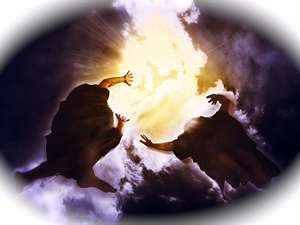 First, scripture:
“And I will grant authority to my two witnesses, and they will prophesy for twelve hundred and sixty days, clothed in sackcloth. 4These are the two olive trees and the two lampstands that stand before the Lord of the earth. 5And if anyone wants to harm them, fire flows out of their mouth and devours their enemies; so if anyone wants to harm them, he must be killed in this way. 6These have the power to shut up the sky, so that rain will not fall during the days of their prophesying; and they have power over the waters to turn them into blood, and to strike the earth with every plague, as often as they desire. 7When they have finished their testimony, the beast that comes up out of the abyss will make war with them, and overcome them and kill them. 8And their dead bodies will lie in the street of the great city which mystically is called Sodom and Egypt, where also their Lord was crucified. 9Those from the peoples and tribes and tongues and nations will look at their dead bodies for three and a half days, and will not permit their dead bodies to be laid in a tomb. 10And those who dwell on the earth will rejoice over them and celebrate; and they will send gifts to one another, because these two prophets tormented those who dwell on the earth. 11But after the three and a half days, the breath of life from God came into them, and they stood on their feet; and great fear fell upon those who were watching them. 12And they heard a loud voice from heaven saying to them, ‘Come up here.’ Then they went up into heaven in the cloud, and their enemies watched them. 13And in that hour there was a great earthquake, and a tenth of the city fell; seven thousand people were killed in the earthquake, and the rest were terrified and gave glory to the God of heaven."  Revelation 11:3-13

Some see this an an example of a mid-trib Rapture, using the two witnesses as examples of what will be happening in the rest of the world at this moment in time, but if that is the case, then where are the references to every other believer being raptured at that time?  There aren't any.

Here we have a major event.  These two witnesses cause a worldwide drought, turn fresh water in to blood, and cause all kinds of plagues to inflict those who have not accepted Yeshua (Jesus) as their Messiah. The Antichrist, now possessed by the Devil himself, is allowed by God to kill these two men and the Antichrist now becomes a 'god' to those who have been deceived and who will look to anyone else but Yeshua as their 'savior.'  The world rejoices to the point of giving gifts to one another in celebration of the deaths of these two men who they blame for causing such suffering in the world. The world is so depraved at this point, that the corpses of these two men are left on the ground to rot.

Something happens three and a half days later that causes the unbelieving world to acknowledge God for who He is. The two witnesses return to life and God audibly calls them back to heaven, rising up to heaven just like Jesus did... on a cloud.  If this truly is the rapture, why is there no mention of any other believer being raptured at this time? The reason there is no mention of the billions of Christians being raptured is because the two witnesses are the only ones who will be rising up to heaven during this mid-trib event.  God wants the focus to be on the two witnesses at this moment in time.  Why?

When the Rapture takes place, most people will refuse to believe that it has anything to do with God.  Unbelievers will use their human intellect to devise a whole host of theories to explain away the disappearances.  Some may blame aliens, some may say that our universe may have momentarily made contact with a parallel universe, some may say that the earth purged itself of excess humans to protect itself, some may say that those individuals who disappeared evolved to a higher form of consciousness ... the list goes on and on.  Most will do anything to reject the fact that Jesus came to retrieve His "bride" and whisk her to safety before the horror of what was about to happen on earth.

So here we have a population that has devised theories about the disappearances and have rejected the notion of a "rapture."  As the two witnesses do their thing, more and more people will begin to focus on them.  It will take three and a half years before every individual in the world finally focuses their full attention on these two witnesses and call for their deaths.  So what happens next?  Well, if they don't want to believe that Yeshua raptured true born-again believers in the blink of an eye, then perhaps they'll believe what is about to happen in full view of the entire population of the planet.

The two men are raised back to life... right before their eyes!  No quick disappearance for these two.  God is going to show the world that it was He that caused the disappearances 3.5 years beforehand and He's going to give the world a slow motion replay using these two men now standing before them. God then audibly... AUDIBLY... calls them back to heaven!  Everyone hears Him speak the words!  Then these men don't just disappear like the millions that were raptured... no.  They rise up to heaven in a cloud, just like Jesus did. Then, to put an exclamation point on the end of this event, God causes an earthquake that topples one tenth of Jerusalem and kills exactly 7,000 people. Do the people react as they did before, when the rapture happened?  No.  The scripture shared at the beginning of this article says that "the rest were terrified and gave glory to the God of heaven."  Some will truly repent and believe, but most will go back to life as usual once the experience has worn off.

God, throughout the entire Tribulation period, continues to give unbelievers the opportunity to repent and be forgiven, believe and be saved.  It's kicked off by the Rapture and is followed by the seven seal judgments and trumpet judgments.  After that, the two witnesses are raised back to life, are called by God Himself, and rise to heaven in view of the entire population of the planet (via media of course). Then the seventh trumpet sounds, there is silence in heaven for about half an hour, and the Great Tribulation begins, with the release of the seven bowl judgments over the next 3.5 years.  After all this, most will continue to reject God and even look up and shake their fist at Him in defiance, blaspheming the God of heaven.

This, in addition to the other reasons I've given in my two previous articles, is why I believe in a pre-trib Rapture.

If you would like to read the other three articles in this series, please click on the links below:

Why I Believe In A Pre-Tribulation Rapture Pt. 2 - Noah, Lot And Rabbit Holes

Why I Believe In A Pre-Tribulation Rapture Pt. 4 - The Apostasy, Or Falling Away

If you would like to read a more detailed article written about the two witnesses, please click here.

Repent and be forgiven! Believe and be saved!
TribulationHarvest.net
Posted by Ken Souza at 12:12 PM