Christmas is not a biblically sanctioned day of observance. Nowhere in the New Testament are there examples of born again believers celebrating the actual date of Jesus' birth, nor are there any commands from God about observing such a day. That is my shorthanded opinion on the subject. If you want to hear more, please continue reading.

In the Bible, there are God appointed feasts (appointed times) for His chosen people... Passover, Unleavened Bread, First Fruits, Weeks, Trumpets, Day of Atonement, and Tabernacles. These all reflect the work of redemption through Jesus Christ. These seven feasts were appointed by God, giving specific instructions on how they should be observed, including the dates and times. These feasts, and only these feasts, were appointed by God as a way to foreshadow Yeshua. Nowhere in the New Testament did God appoint a day or time to celebrate the birth (or the death/resurrection for that matter) of our Savior.

Tradition and nostalgia can be powerful weapons in the hands of the enemy. They can cause us to ignore scriptural truths in our blind attempts at keeping tradition alive and to keep those powerful feelings of nostalgia stirring within us. I know how powerful nostalgia can be. It doesn't just involve reliving past memories, it involves the things that trigger those memories as well. A sound, a photo, a song, a decoration, food, or even a "remember when" moment, but especially an anniversary or holiday.

Unbeknownst to me, the Lord had been bringing me to a point where I would be receptive enough to have my perception of Christmas challenged. It occurred one winter, when I sat staring at my beautifully decorated tree. It was nighttime. The lights in the house were off and I was alone. The only source of light was the Christmas tree. The colors were beautiful and the single set of bubble lights that I had somehow managed to spread out evenly on the tree were bubbling away among the multitude of multicolored mini lights strung evenly top to bottom. I sat looking at the hand painted angels hanging here and there on the branches. The blue glass ornamental balls painted with scenes of the manger and the three wise men (I have an issue with the story of the three wise men as well as their supposed visit to the manger, but that's explained in another blog) reflected the lights as they hung on the tree as well. Since she passed away, the angel my mother used to have on the top of her Christmas tree has adorned mine. I was so glad that I had a "Christian" tree that didn't reflect "worldly" themes. It was then, in the quietness of the evening, in the midst of my silent thoughts, that everything changed.

Clarity of mind suddenly came to me. It was as if I had an epiphany. At that moment, I asked myself, "What am I doing?" I had known for a while that the act of putting up a tree was a pagan ritual that I probably wasn't supposed to be participating in, but it was a subconscious thought that I always brushed off every holiday season, and by avoiding that thought, I was able to put the tree up every year without any guilt. At this moment, though, I was beginning to understand that what I had standing before me was a compromise tree. What do I mean by that? Well, as you know, compromise is something we all do sometimes in an effort to convince ourselves that we're not doing anything wrong (consciously or subconsciously). We deceive ourselves and disguise something that we know to be wrong as something that is acceptable. It's how I used to treat Halloween so many years ago. I knew I shouldn't be participating in Halloween, but I compromised because I didn't want my children to feel excluded. I used to tell them that they could go trick-or-treating as long as they wore a costume that wasn't considered "evil." They dressed as Moses, an angel, funny freaky Frankenstein, the spirit of Christmas, etc... They were compromise costumes. I eventually ended that practice, but now here I was, going in the same direction with the Christmas holiday. I was compromising. I was putting Christian decorations on a pagan symbol as well as using other pagan symbols around my home to celebrate Christmas. I was trying to disguise a pagan holiday with Christian themes and attempting, in my own mind, to pass it off as a celebration of Christianity.

I had never heard of Christians totally abandoning the practice of celebrating Christmas, but that didn't stop me from turning away from what I saw as a celebration of paganism. It was the last time I participated in Christmas.

It was a while after that when I met a married couple online who felt the same way that I did. They revealed to me that there were many other born again believers who were being led to reject the Christmas holiday. There are plenty of videos and articles out there that explain the paganism surrounding Christmas and the symbols associated with this day, so I won't get in to all of that here, although I will ask you a question. Have you ever questioned where holly, wreaths, mistletoe, trees, lights, candles in windows and yule logs originated? You should educate yourself in the origins of some of these traditions and symbols. 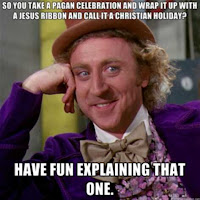 My favorite saying when talking about holidays such as these, is that you can't take a pagan tradition, wrap it in a Jesus ribbon, and think that this makes it okay to participate in it. It just doesn't work that way.

Christians have been trying to convert Halloween into a more biblical friendly event. Why hasn't it been a success? Simple. Christianity and Halloween are incompatible. The symbols and traditions of Halloween are evil and the only way to combine them with Christianity is through compromise. You need to change the symbolism and traditions of Halloween and create a new narrative where they meet Christian expectations. This is exactly what happened with Christmas. To put it in more modern terms, paganism was rebooted and re-branded as Christmas. Pagan symbols were whitewashed and given new meaning in order to make the pagan symbolism more acceptable, while still keeping their original meaning to those pagans who continued to worship outside of Christianity. Christianity took pagan wreaths, mistletoe, yule logs, etc... and decided to brand them as "Christian" for the faithful, even though they knew that these things were pagan in origin. One thing is for sure...God doesn't recycle paganism. Paganism is anti-God. 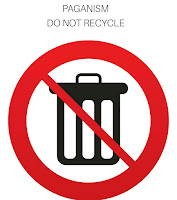 The way I see it, I can't participate in pagan traditions that have been dressed up to look like a Christian holiday, even if I claim that my celebration of these symbols is my expression of faith in God. We can put a Christian spin on pagan objects and traditions to try to make it our own, but why? Why are we spending so much time, energy and money on a holiday that God never required or encouraged us to celebrate, that the early church never participated in, and that has pagan roots? There were times in "church" history when they tried to expand through compromise, and it only weakened the church as a whole because these compromises have become nostalgic traditions that have been blindly accepted by the majority of believers.

There is no day more important on the calendar than any other day when it comes to how we are to live our lives as born again believers. We don't need a day to remember Jesus' birth or resurrection, because we should be living our lives celebrating those moments daily, which is how I believe God meant it to be. How can we witness to others effectively if we don't have that sustaining joy and thankfulness of Jesus' birth and resurrection?

Most born again believers are not ready to accept the fact that Christmas is a man-made holiday based on pagan symbols, traditions and celebrations. That's understandable. The important thing is to keep an open mind and to leave yourself open to the leading of the Holy Spirit on this matter.

I'd be interested in knowing what your thoughts are on this subject. Please keep your comments civil and profanity free. All comments are reviewed by me before being posted. Any comments that do not meet these requirements will be deleted before even making it on to the blog.

REPENT AND BE FORGIVEN!
BELIEVE AND BE SAVED!