Unbelievers Waiting for the Rapture! 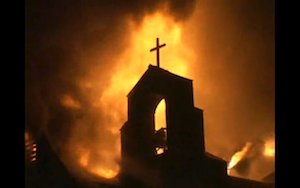 Believe it or not, it's true. Many unbelievers and haters of the Judaeo/Christian God of the bible concede that if the Rapture ended up being a real event, they'd be more than happy to see every single born again believer taken from the face of the earth. Many believe that born again believers are intolerant, sexist, immoral, homophobic, hateful, and judgmental. They equate Christianity with Hitler/Nazis, the KKK/white supremacy, and any other group out there past and present that they deem as hateful. It used to be, in the modern era, that born again believers were only persecuted in countries like China, North Korea, the Middle East and in other areas of the world where anti-Christian sentiment had a strong hold. Now Christians in free western countries like England and the United States are being persecuted. Sure, it hasn't reached the point where it has in other anti-Christian nations, but it's not a huge leap from suing the owner of a bakery or print shop because they won't produce a product that glorifies lifestyles that are contrary to Christian beliefs, or putting a street preacher in jail, to actually physically hunting down Christians.

Sooner or later, persecution like we see it in other parts of the world will rear it's ugly head in the western world, bringing with it physical torture and death. Just look at how some of these individuals/groups treat supporters of President Donald Trump, many of who are born again believers. These individuals have had objects thrown at them, been spat upon, had their belongings ripped off of their body, been physically assaulted, been harassed to the point where they are forced to leave an establishment they're doing business with, had their house surrounded, received threatening phone calls and messages on their social media accounts, been face to face with someone spewing hatred toward them, and had their livelihood ruined by frivolous lawsuits. Look at what continually happens to those who are peacefully trying to educate the population that abortion is the torture and death of a child. They are assaulted verbally and physically, they have their educational materials (posters, signs and pamphlets) defaced, destroyed and taken from them, and they are often the ones removed from the space in order to quell any hostilities.

It's not just the average citizen exhibiting these types of vengeful, fascist, and anti-Christ behavior. Unbelievably, many of our political leaders and educators are actually endorsing these types of behaviors by standing in front of these crowds and encouraging them to act this way, conditioning them to believe that by violent and confrontational behavior, they're acting both for the good of the country and for the good of the world as a whole. These crowds are encouraged to use violence and intimidation to force those who don't agree with their belief system to fall in line or to retreat and be silent. How easy is it going to be for the Antichrist to whip up this type of resentment towards born again believers when the world is in the midst of a strong delusion? People are already displaying this type of behavior, so it wouldn't take much to kick it up a notch and solely focus this abusive and criminal behavior toward the Christian community. What the Christian community is dealing with as a whole in this country and other free countries in the world, is like a walk on the beach compared to what's coming in the near future.

All of the prophecies in the word of God have come to pass, except those that are linked to the build up to the Rapture and everything that follows. Want proof that prophecy is still relevant? Look to Syria. There is a prophecy that states that Damascus is going to be so utterly devastated, that it will become a barren city. This prophecy has yet to be fulfilled.

Isaiah 17:1 "The burden against Damascus. "Behold, Damascus will cease from being a city, and it will be a ruinous heap."

You may scoff at what is written here, but I guarantee you that when this prophecy becomes reality, right in front of your eyes, you'll be scrambling to find this blog site again and read more about what's to come. Either that, or you'll explain it away as something other than prophecy. It doesn't matter, because biblical prophecy will have come to pass. You can either accept it as the fulfillment of biblical prophecy or you can try to convince yourself that there is a more logical, more humanistic excuse for why this prophesied event came to pass.

In the mean time, this article is about many unbelievers halfheartedly hoping that the Rapture is a real event so that they can be rid of Christians once and for all. They believe that life on this earth will be a paradise without Christians getting in their way. They believe they'll finally be living in utopia once all born again believers are gone and they can run the world as they believe it should be run. What they don't realize, is that there will be global devastation when the Rapture takes place, and the world will never be the same after that event. Not only will they need to deal with the aftermath of the Rapture, which you can read about here, but there will be unexpected consequences that occur after that event. What will they be?

One of them will be the unexpected resurgence of Christianity all over the world. Yes, what many unbelievers don't realize is that this event will trigger spiritual conversion in the hearts and minds of men and women worldwide. Those who drifted away from the faith, those who had been witnessed to and evangelized by other born again believers in the past, and those who will have their heart pricked when they hear the word of God preached by the 144,000 Messianic Jews who God will be sending out to evangelize the world... they will repent and be forgiven! They will believe and be saved! The world, thinking they've finally rid themselves of born again believers, will find themselves in the midst of millions upon millions of new born again believers.

The other unexpected consequences will consist of the events awaiting everyone during the seven year Tribulation. Worldwide earthquakes, pestilence, famine, the sun turning black, the poisoning of all of the worlds fresh water supply. There is so much that the world will have to endure and you can read more about it here.

Unbelievers don't realize that they will be living through biblical history. They'll be living and breathing biblical prophecy. They either won't be aware of it because of the strong delusion that will encompass most of those living on the earth at that time, or they'll reject the notion outright and refuse to see the truth because it will be in conflict with everything they've ever believed. They will be convinced to accept the lies and reject the truth, just as many people today are convinced by celebrities, politicians, mainstream media, and the like, to accept what is spoon fed to them instead of seeking out the truth or finding out if there's more to the story. They will experience the sights and sounds of all that was prophesied, and a majority will die shaking their fist at God because they couldn't bring themselves to believe that they were wrong. They will refuse to submit to God, who they will see as evil, unloving, and unjust.

If you're an unbeliever who is scoffing at this, remember that there's no guarantee for tomorrow, but if tomorrow does come, and another month and another year, and you are allowed to live long enough to witness the destruction of Damascus or live through the Rapture, then don't harden your heart. Stop and understand that there's little time left. The Tribulation lasts seven years, but there's no guarantee that you'll live through the entire Tribulation. In fact, three quarters of the earth's population will perish before the seven years is up.

I encourage you to read the Salvation Message on this web site. Think about what's to come and understand that biblical prophecy is real, that God is real, that Jesus lived and died to pay for your sins and remove the stain of that sin from you in order to save YOU from eternity apart from Him.

Those who wish Christians would disappear are living on borrowed time. Yes, God blesses them with every breath they take and causes their heart to beat again and again. He causes the sun to rise on their day just as the sun rises on ours. He loves us all and wishes that none of us would spend an eternity apart from Him. There will come a time, though, when that last breath is taken, when the heart beats for the last time, and when the sun no longer rises on another day. Then, and only then, when they take that first step into eternity, will they realize that there is another life after this one. By then, it will be too late to change anything. Which future have you chosen?

Repent and be forgiven! Believe and be saved!
TribulationHarvest.net
Posted by Ken Souza at 11:02 PM