Does The Bible Prove Ghosts Exist? 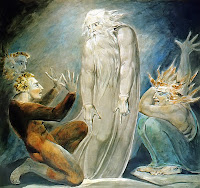 The practice of necromancy... it's in the bible. 1 Samuel 28:9-21 tells the story of a witch who seemingly conjured up the spirit of Samuel. Is this God's way of telling us that ghosts really do exist? Let's see what this scripture says.

Brief background: Saul was a king King of Israel. When Saul was walking in fellowship with the Lord, He obeyed God in His command to destroy all demonic practices because it was an affront to God. Saul eventually began disobeying God. God had repeatedly warned him that He would turn His face away from Saul if Saul continued to disobey Him. When the Philistines were preparing to attack, Saul sought out the Lord, but the Lord didn't answer him. It's because of this that Saul sought out a medium to conjure up the voice of Samuel so that he might seek Samuel's council.

1Sam. 28:8-9 "Then Saul disguised himself by putting on other clothes, and went, he and two men with him, and they came to a woman by night; and he said, 'Conjure up for me, please, and bring up for me whom I shall name to you.' 9But the woman said to him, 'Behold, you know what Saul has done, how he has cut off those who are mediums and spiritists from the land. Why re you then laying a snare for my life to bring about my death?'"

Saul had to disguise himself because he couldn't let anyone see that he was visiting someone who performed demonic rituals. The woman was cautious at first, making this stranger aware that she was taking her life into her own hands if she were to assist him. At this time, she was unaware that it was Saul that was asking her to do this.

1Sam. 28:10-12 "Saul vowed to her by the Lord, saying, 'As the Lord lives, no punishment shall come upon you for this thing.' 11Then the woman said, 'Whom shall I bring up for you?' And he said, 'Bring up Samuel for me.' 12When the woman saw Samuel, she cried out with a loud voice; and the woman spoke to Saul saying, 'Why have you deceived me? For you are Saul.'"

Now necromancers were used to hearing the voices of the "spirits", and the witch would not have been surprised to hear an audible voice response; in fact, that's what she expected. But when she used her incantations to bring up the usual voice response, God took control over the situation and He actually sent Samuel back from the dead. That terrified the witch. She knew that it had to be God who was performing this act, which made her realize that it was Saul that she was speaking to.

1Sam. 28:13-15a "The king said to her, 'Do not be afraid; but what do you see?' And the woman said to Saul, 'I see a divine being coming up out of the earth.' 14He said to her, 'What is his form?' And she said, 'An old man is coming up, and he is wrapped with a robe.' And Saul knew that it was Samuel, and he bowed with his face to the ground and did homage. 15Then Samuel said to Saul, 'Why have you disturbed me by bringing me up?'"

Saul not only created a terrible sin by disobeying God, but now he has appealed to the occult to get guidance, which was the final straw for God. Read through to verse 21 for the rest of that story. It's easy to misinterpret this piece of scripture and think that God is showing us that ghosts exist and that it's possible to conjure them up and speak with them. The fact is that it was God who caused the REAL Samuel to appear to Saul.

So, are ghosts real or not? It depends what your definition of "ghost" is. The spiritual realm exists and it is divided into two parts, good and evil.  Unfortunately for us, evil tries every trick in the book to keep us from experiencing a close relationship with God, including mimicking our loved ones or mimicking those who have died in the past in the hopes that we will develop a belief in ghosts, thus watering down our relationship with God.

Do we honestly believe that God, who is omnipotent, would allow His children to wander around spiritually lost in some sort of limbo state? That He wouldn't have the power or authority to call them home? That a powerless spirit could override the Almighty? Doesn't make sense to me and I'm sure if you see it in that light, it doesn't make sense to you either.

God said that it was appointed for a man to die once, then judgment. There is no scriptural basis for believing that ghosts are people who have died and who have not figured out how to get to where they need to go. God takes care of that at our death. It's not something we have to figure out on our own. The question is, have we accepted Jesus Christ as our Lord and Savior so that we can receive the gift of salvation and be assured of eternal life in heaven when we die?

Repent and be forgiven! Believe and be saved!
TribulationHarvest.net
Posted by Ken Souza at 3:45 AM